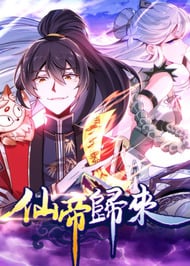 Summary: Three years ago, Yun Qing Yan accidentally fell into the Immortal Realm from the Mortal Realm. After three thousand years, he became the great Emperor Yun of the Immortal Realm. Breaking through the barrier between the two realms, he discovered that only three years had passed. "Before, I was too weak to protect my loved ones. Now, I'll make the whole world bow before me."