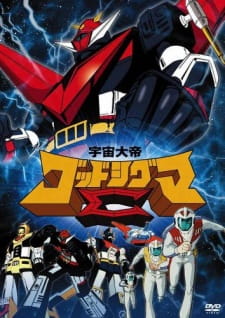 Summary: The story is set in the year 2050 AD, and mankind has been steadily advancing its space technology. However, the planet is suddenly set upon by a mysterious enemy: the forces of Eldar, who came from 250 years in the future. In their time, 2300 AD, their planet Eldar was invaded by Earth, and soundly defeated by Earth's Trinity Energy, a mysterious energy used in their weaponry that possesses power many times that of a hydrogen bomb. The Eldar people's objective is to steal this Trinity Energy before it can be used against them. The Eldar forces begin by taking over Jupiter's moon Io, one of the places humanity has immigrated to by then. After that, they begin to attack Trinity City with their legions of Cosmosauruses in order to steal the Trinity Energy. Toshiya and his friends use God Sigma to protect the planet and the Trinity Energy, and the battle evolves into a long war to retake Io.