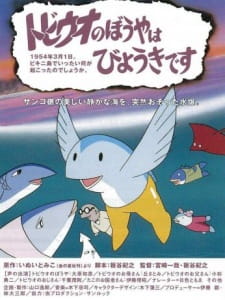 Summary: An anime about Operation Castle and the demise of the crew on the Daigo Fukuryuu Maru (S.S. Lucky Dragon 5). On March 1st 1954, a hydrogen bomb went off (that ended up being similar sized to the atomic bomb dropped on Hiroshima). The radioactive ash fell on the crew, poisoning them. The anime deviates into fantasy as the ash also affected the marine life--that talk and wear human clothing and is the main focus of the movie; how the radioactive ash affected the talking fish.