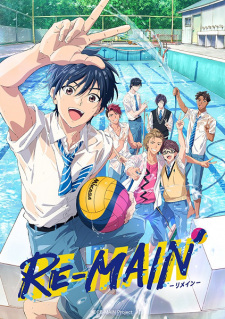 Summary: When Minato Kiyomizu wakes up in a hospital, he learns that he has been comatose for 203 days. As it turns out, a car accident has caused him to lose all memory of his middle school journey. Eventually, he discovers his former glory in water polo and desires to continue where he has left off. However, embarrassingly becoming aware of the massive disparity between his old and current self, Minato begins intensive rehabilitation in hopes of starting anew—a life without water polo. Yet, Minato is promptly reminded of his past prowess and a promise on his very first day in Yamanami High School. Soon enough, despite being completely aware of his ineptitude, he joins the school's water polo club! While needing to relearn the sport's basics, he, along with his clubmates, must recruit new members to attain the required seven-man roster. With that, Minato tries to rekindle his deeply buried talent for water polo—and become one of Japan's renowned players once again.