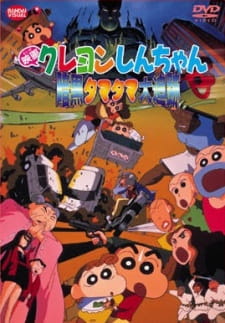 Summary: An action comedy film depicting the Nohara family who get caught in a fight between two clans, Tamayura and Tamayomi. Set in Tokyo and Aomori (northern end of Japan's main island). The Tamayomi clan had plotted to revive the evil genie Jarke and to conquer the world. To stop Tamayomi's plot, the three gay brothers (Rose, Lavender and Lemon) from Tamayura clan wrested Jarke's ball, which was a key to revive Jarke, from the bar girl gang of Tamayomi clan, but Shinnosuke's younger sister Himawari swallowed down the ball. The Nohara family, with the three gay brothers and a female detective Yone Higashimatsuyama, fights a fierce battle against the Tamayomi gang chasing them.