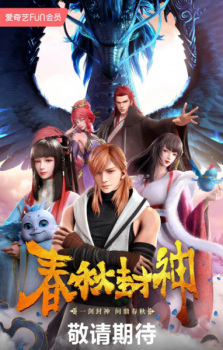 Other Name: Immortals of the Godless, Chunqiu Feng Shen, 春秋封神

Summary: In the late years of the Western Zhou Dynasty, the fatuous ruler, King You of Zhou, is compelled by the seductive concubine Bao Si to set up a God Creation Tower that causes rampant acts of demons and a hellish time for the people. To end the tragic era, Han Ji is ordered by his master to eliminate demons and assist Zishang to defeat the King. However, they never expect that Bao Si is backed by the Immortal, Yuanming Holy Lord. The God Creation Tower is determined to be built. The world is once again in crisis... Cruel tyrants who fight in battles, powerful heroes across the nation, noble beauties that cannot be reached... Will they become the Gods they want to be?